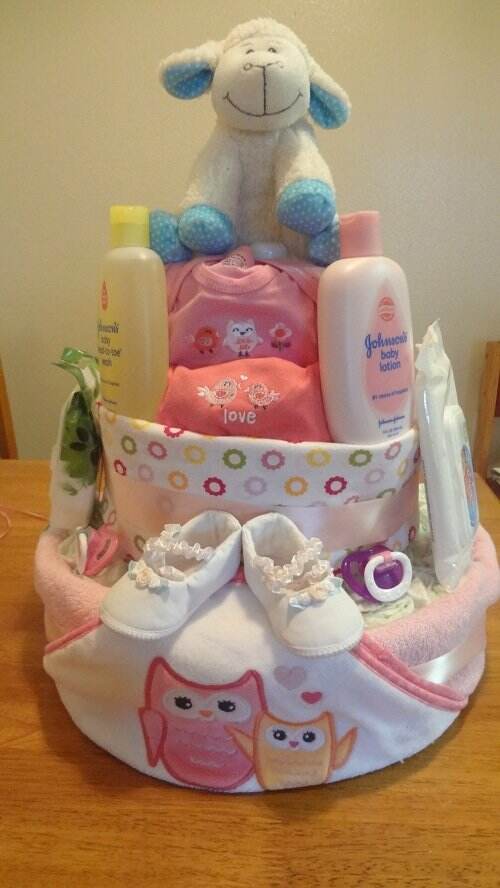 Diaper cakes are all the rage lately. They can be a great shower gift and give you lots of opportunity to express your creativity and make a unique gift. You can make your diaper cake using items from the recipient’s registry (diapers are always on a registry) or just get basic things that every baby needs, like wipes, baby wash and diaper cream!

You may have seen my post on how to make a basic diaper cake, but this one is a little bigger and a little more fancy. The diapers themselves are less visible, since they are covered up with other goodies, like receiving blankets and towels.

First of all, you want to roll up your diapers and tie them. For an easier option, you can purchase tiny rubber bands in the hair section at Walmart. The clear ones blend in more, but the colored ones are less expensive and they should be covered by the ribbon on the finished diaper cake.

I also put a container of wipes in the bottom layer of my diaper cake. Surround the wipes container with the rolled up diapers to form a circle.

Surrounding the bottom layer, I also used a hooded towel. I placed the towel face down with the hooded point farthest from me. I folded the towel up until it was about the height of the rolled diapers.

I carefully wrapped the towel around the base and tied it with a string. Make sure the hood part up the towel doesn’t get tied in. That will go over the string/ribbon later (as you can see in the top of the post).

Stuff as many more diapers as you can into the bottom layer. Stuff them until you cannot get another one in! You want to be able to lift the base without it coming apart.

The second layer I did pretty much the same thing, except I put a baby bottle in the middle. The top half will be pretty much concealed with the third layer. To surround the second layer, I used a receiving blanket folded up and tied around the layer.

As in the bottom layer, stuff as many more diapers in as you can. You could also use onesies, burp cloths or receiving blankets, as long as they are the same height.

The third layer I decorated with onesies. These were 0-3 months and I folded them in thirds. Just like with the hooded towel, I leave the top part of the onesie to go over the string/ribbon.

Once the cake is assembled, decorate it with items of your choice. You can use baby wash, pacifiers, diaper cream, shoes, teethers, washcloths and stuffed animals.

Okay, who has babies/toddlers who do not like to pull tissues/wipes out of their containers? Have you ever turned your back for a few minutes only to realize you had left a box of tissues in the baby’s reach and now have a bunch of clean tissues all over the floor?

I was really looking forward to this review because I had this set when I was a child (back in the 80’s, so that tells you how old I am!). I even got my old books and cassettes (which no longer work) from my mom. Nowadays, the set includes CD’s instead of cassettes, which are less…

Fudge is a super popular dessert around the holidays, but “real” fudge can be tricky to make. This fudge is simple, delicious, uses only a few ingredients and is great for a kid to help with. No candy thermometer needed!

Cree and Scooter love to travel, but when they’re at home, Cree loves doing crafts with her mom. And since it’s around the holidays, Cree and her mom made some cinnamon scented tree ornaments. Would you like to make some too?

After seeing this project on countless websites, I decided to give it a try because it looked so neat. A homemade lava lamp. Of course, lave lamps are awesome, and if you’ve ever had one, you know how mesmerizing it can be to watch it continuously flow.      So, I’ve been meaning to try…

I thought I would share this recipe for homemade laundry soap that I finally got around to trying out (after months of actually having the ingredients on hand). I got this recipe from Living on a Dime, though there are various recipes out there that use pretty much the same ingredients.

Subscribe for updates and get a FREE Weekly Planner!