This post contains affiliate links, which means I may receive a small commission if you purchase through my links. 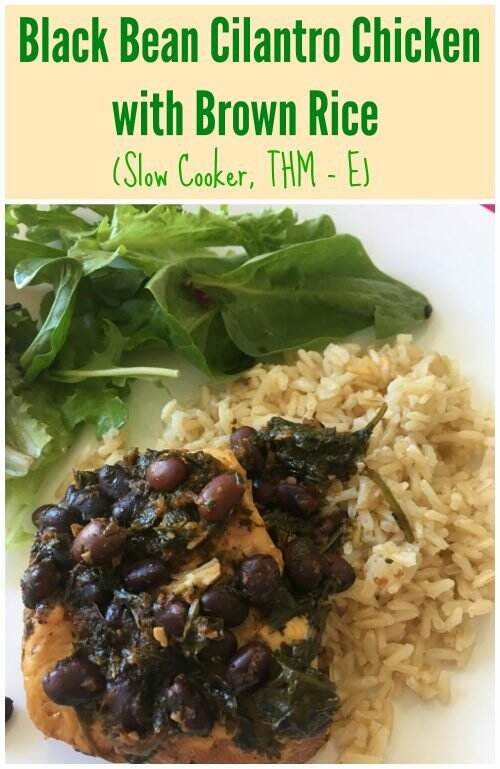 I love easy recipes, don’t you? That’s why slow cooker recipes are so great. You can do a little prep ahead of time, throw it in your slow cooker, and it cooks while you go about your business–you can even leave the house! I have an Instant Pot that has a slow cooker setting because I love the option of cooking it slow or cooking it fast. And a good chicken breast recipe is always a welcome addition to the menu!
This recipe does contain cilantro. So, if you don’t like cilantro, this is probably not the recipe for you. Why do I mention this? Well, because on the post for my cilantro lime chicken breast recipe, I got a comment from someone saying they don’t like cilantro. Hmm. Ok? So maybe you make something with “cilantro” in the title. Kinda like this recipe. But I digress.

If you are following the Trim Healthy Mama plan, this would be an E, as it’s low-fat and does have a few good carbs. If you are not familiar with this plan, you can read this introduction to Trim Healthy Mama I wrote some time back. But regardless of what eating plan you’re following, if any at all, this recipe is worth your time (unless you hate cilantro).

My family loved this recipe. Even my picky 5 and 2 year olds, who I am hard pressed to actually get to finish a cooked meal, finished their plates. That alone makes it a keeper in my house. DH also really liked it. Make sure you pour some of the juice at the bottom of the pot over your chicken and rice to give it some extra flavor!

In our household, this recipe fed 2 adults and 4 kids ages 2-7. So it would probably feed 4 adults or teens pretty well. You could even bulk it up with more beans and rice if you need to. Of course, you can also double the recipe if you have more to feed. Beans, rice and cilantro are all pretty inexpensive. My husband was thrilled to have the leftover chicken to eat later, even without rice.

I should have taken a picture of how I cut the chicken breasts up, but I did it, so I’m just going to describe it. First, I cut them in half horizontally. Like, the thinner more “pointy” half, to make a triangle. The thicker, rounded part I fileted. So, each breast became 3 pieces.

Remember, these are large “conventional” boneless breasts. If you use organic, they tend to be smaller, so you may not even need to cut them up. Even with the large ones, you don’t have to cut them up if you don’t want to. By all means, just toss them in wholesale if you don’t want to mess with cutting. But a whole large breast would be way too big for some of us. And I feel the flavor is more evenly distributed when cut up. Put those aside and start on the cilantro mixture.

So what I did was chop the onion and garlic in my food processor, then added one bunch of the cilantro (stems removed) the lime juice, oil and seasonings and turned it on for about 5 seconds and stopped it. It was so finely chopped, almost a little more than I wanted. So I diced the 2nd bunch of cilantro by hand. I mixed the onion/cilantro mixture, hand chopped cilantro and rinsed black beans in a medium sized bowl. You could probably chop it all by hand and be just fine, if you don’t have a food processor. It will make a nice cilantro-bean “salad.” Smells great too!

About 45 minutes from time to serve, cook your brown rice. 1 cup dry brown rice, 1 cup chicken broth and 1 cup water in my rice cooker is what I like to use, to make 2 cups of cooked rice. You can make more if you want, of course!

When the chicken is done (it will be moist and juicy!) place a piece or two of the chicken over about 1/2 cup rice and top with some of the bean mixture and some of the cooked out juice drizzled over it. Serve with some salad greens and use a vinagrette or yogurt dressing for a well balanced meal!

In light of Valentine’s Day approaching, here is a really awesome recipe for Peanut Butter hearts, modified from a recipe I found at Brown Eyed Baker. If you’re a fan of Reese’s Peanut Butter Cups/hearts/trees, then you’ll love these. The filling is actually quite easy to make. The dipping, depending on what shape you choose,…

I know I would normally have a “craft” here, but this week, I thought I would do something “edible.” But it’s also sort of fun to play with, and if you color it, you can do stuff like you would with play dough. However, this is a lot stickier than play dough. So you…

There are some affiliate links in this post for your convenience. Your price is not impacted in any way and your purchase helps support this blog and giveaways for my readers!  Repin this recipe for later! I’ve been trying to tweak many of my favorite recipes to be more “Trim Healthy Mama” friendly. So my…

Low Carb Mozzarella Sticks Recipe  I love fried mozzarella sticks. I don’t usually get to have them when we go out to eat, because we don’t usually get appetizers, cause they’re kind of expensive. Also, the breading is not exactly on plan on Trim Healthy Mama. Which brings me to this idea of low carb…

I finally got around to making my own marshmallows. At first I was a little skeptical that they would turn out right, but they actually turned out pretty well. And they taste pretty similar to the store bought ones, so if that’s what you’re looking for, these might be a great fit.

Turn your Instant Pot into an air fryer!